The Courtesan: An Enigma 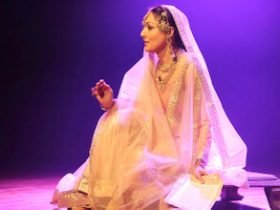 ‘The Courtesan Project’ is a unique research and documentation exercise via which Manjari seeks to chronicle the historically remarkable role of the tawaif in artistic life: as muse to poets and painters, writers and kings, musicians and leaders. In doing so, she seeks to claim for these maligned women the reverence due to them for their learning and their performance art; their intelligence and wit; their talent and raw sensual power. This project is a medium to draw the attention of the society towards our erstwhile courtesans and how discriminatory practices impacted not only their life but also of their families. Thus, advocating and creating much required space for them as an ‘artist” in the society through cultural activism and social change.

Those forgotten dancers called tawaif & nachnewali who do not find space in the documentation of performing arts, whereas their counterpart men performers are referred to as Ustads and the incredible women merely as Nautch Girls. These were the women who moved from the Kotha and formed the part of the Parsi theater and then subsequently were the first women performers for the big Hindi Film Industry. And their contribution to art largely remains un acknowledged. This project brings their art to the foreground. Manjari recreates the dance of these incredible women performers, the royal performers of the erstwhile Indian courts and recreate a bygone era. This production has an actor who narrates in English, stories and anecdotes from the lives and the times of the Tawaifs and the Courtesans. The concert incorporates dance by Dancer Manjari Chaturvedi and theatrical story-telling performances by Actor Neesha Singh.

Manjari Chaturvedi is a leading exponent of classical dance in India. An unusual dancer, she has blazed her own path in the field of performing arts. She has taken the traditional form of Kathak and has created her own style, her own brand of dance. Her productions as a dancer are projects that are researched and documented, as she first studies the original traditions and then finds her own unique artistic expression of the subject. Manjari has extensively worked on gender sensitive subjects through her medium of dance, exploring the many traditions woven into poetry, music and dance.

She has been the part of the Sufi Symposium at the prestigious Smithsonian Museum Washington D.C. and of the conference on Living heritage by UNESCO and is the Jury and member of “Think Tank on Asian dance” for the prestigious Asian Dance Committee in Korea. In the past decade Manjari Chaturvedi has collaborated and performed with a wide range of international artists as Global Fusion with Tim Ries (Saxophone, Rolling Stones, USA) And Ustad Shujaat Hussain Khan (Sitar, India), Taufiq Quereshi (India), Kailash Kher (India), Kevin Hays (Piano, USA), Dhaffer Yoseuf (Oudh, Vocals, Tunisia), Rahim Al Hajj ( Oudh, Iraq), Patrick Possey (Saxophone, USA), Firas Shahrstan (Qanun, Syria) and Micheal Glenn (Bass, USA). With the establishment of the Sufi Kathak Foundation she has taken a leap further to support marginal artists and provide research opportunities to scholars and students under the banner of the Foundation.

Neesha Singh is an actress, who started her career as a successful model. She did a few acclaimed Hindi films, notably M.S Sathyu’s ‘Kahan Kahan Se Guzar Gaye’, Sagar Sarhadi’s ‘Bazaar’ & N. Chandra’s ‘Ankush’, before making a decision to move to television, where she had a long, successful acting career. On television she has worked with well-known names like Shyam Benegal among others. She has had starring roles in popular television serials like ‘Bharat Ek Khoj, ‘Choli Daman’, ‘Upanyaas’, ‘Kathasagar’, ‘Kashmakash’ and in the first Indian made English television serial, ‘A Mouthful of Sky’. She has also hosted long running shows like ‘Mansi’ & ‘Rangoli’.

Neesha had the leading role of Rani Jindan Kaur, widow of Maharaja Ranjit Singh, in Gursharan Das’s play ‘Larins Sahib’. Directed by Rahul D’cunha. It was the first Indian play in English that was invited to be showcased at the Edinburgh Fringe festival. She has had a long, keen interest in yoga, & holistic health & beauty. She has a published book on teaching yoga to children through storytelling and drama titled, Good Morning Sun.