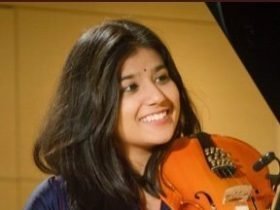 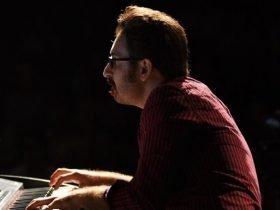 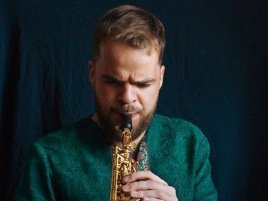 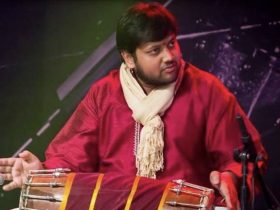 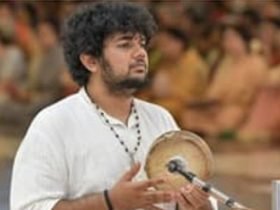 As the name suggests, Sanyog brings together five talented young instrumentalists belonging to diverse musical traditions, wielding assorted instruments. The group led by Apoorva Krishna, a Carnatic violinist with several international accolades, Hami Keivan – an Iranian pianist and composer in the tradition of Jazz fusion and Jerzy Mączyński, a polish saxophonist-composer. The ensemble also comprises of two versatile Indian percussionists- Anoor Vinod Shyam and Sunaad Anoor, who besides playing mridangam and Kanjira are also adept in playing other percussion instruments. 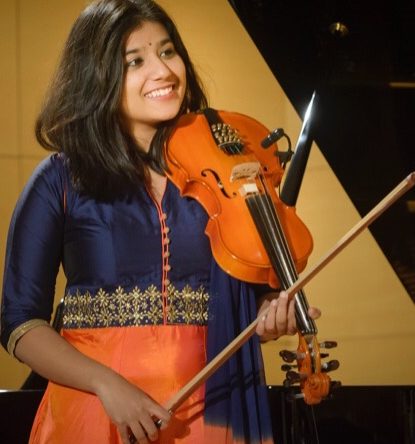 Apoorva Krishna is an accomplished South Indian Classical Violinist, in the Carnatic genre of music. She received the Young Artiste award from Tarisio Trust, UK in 2017, making her the first Indian to have ever received the grant. She is also the recipient of the prestigious Dr. MS Subbulakshmi Fellowship in Music Award from the prestigious Shanmukananda Fine Arts Sabha, Mumbai for years 2018 and 2019.

Born in New Jersey; of Murali Krishna and Arathi Murthy, and raised in India, Apoorva is an A Grade Ranking artiste from the All India Radio, Bengaluru. She graduated from Berklee College of Music in Masters in Contemporary Performance and is presently pursuing Post Masters Fellowship from Berklee Global Jazz Institute, Boston USA.

She loves collaborating with artists working of non-Indian musical styles​ ​and spreading Indian Classical Music through her violin to the global audience. Her music is soul stirring and is achieving rave reviews from both critics and audiences. At Berklee Valencia, she extensively collaborated with artistes across various genres, cultures and backgrounds to create new sounds, cutting across borders or boundaries.

She has performed over 500 concerts in India and abroad and has received accolades from prestigious music festivals and competitions at the national and international level. She won the award as Best Violinist​ ​at the Madras Music Academy in the Spirit of Youth Festival and the Sheik Chinna Moulana Yuva Puraskar from the Indian National Reality Show Naadbhed. 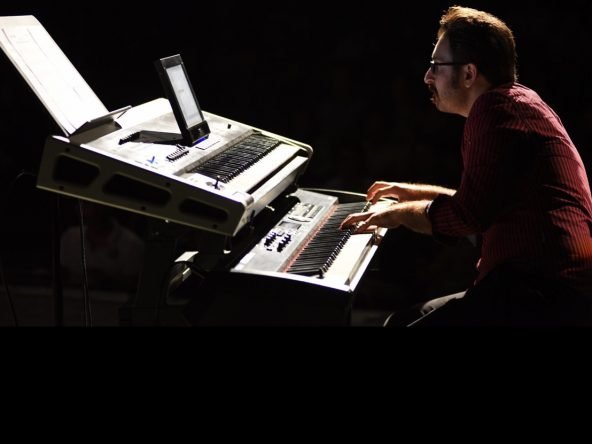 Iranian pianist and composer in jazz fusion music style Hami Keivan latest release “Music for Themes” (2017) for solo piano, is based on traditional Iranian music. He has previously released “Minimal for Noise and Piano which is for Piano, Synthesizer and iPad” (2014), and “The Colors” (2013).

Born in Isfahan to a musical family on May 7, 1987, Hami’s musical studies began at the age of 6 with the tombak, an Iranian hand drum. His first music teacher was his father a professional hand drum player. At 15, he entered the “Young Music Festival” in Isfahan and ranked first in this nationwide percussion music event. But 1 year later, he gravitated towards the piano as his primary instrument and went on to a music high school for a three-year course in 2001-2002. “I loved the percussion yet I wanted to learn composition and find new colors on melodic instruments,” he says. “When I was 8 I watched a Yanni concert in black and white TV and  said to myself, the piano is another planet in my music life.” In fact, I used to play tombak, I wanted to compose melodies on a melodic instrument.

While studying European classical music in high school, he grew interested in contemporary music and composition. “ I was 17 and tried to buy some tapes and books to learn more about musicians such as Arnold Schoenberg and Bela Bartok,” he says. “ I just wanted to find out more about Modern Music and new words in music ocean.”

In 2013, he released his first album, “The Colors,” composed for Iranian instruments and computer. In 2014, He entered two pieces of his album, “Red” and “Black,” in the FAJR music festival Tehran, Iran and won a second place among 120 entries. To continue expanding his vocabulary he took online courses at Berklee, including Jazz Improvisation with Gary Burton in 2014.

His music career is not limited to composing and performing. Hami enjoys being an educator and has been teaching piano and composition at Baste Negar, Maktoob Nokhost and Hezar Dastan music have instituted in Iran since 2007.

He is currently completing his Masters on Contemporary Performance and Production Concentration at the Berklee College of Music, Valencia, Spain.

Jerzy Mączyński (born on 17.03.1995) – Polish saxophonist and composer. From an early age, he was educated in Jazz Music Schools and classical music classes (including “Bednarska” in Warsaw). A graduate of the Music Academy in Wrocław, Jerzy spent the last years of his undergraduate studies on a scholarship in Denmark, where he perfected his music skills at Syddanskmusikkonservatorium. From September 2018, he began his master’s studies at the prestigious Berklee College of Music in the field of contemporary music performance. Jerzy is the Co-founder of the freejazz collective P.E. Quartet, with which in 2018 he released an album titled “Whatever”. He is the Leader of the music concept team Jerry & ThePelcianSystem with which in May 2019 he released his debut album. He has played on many Polish and international stages, including: at music festivals: Jazz Jamboree, Ferrara Buskers Festival, JazzJantar, Jazztopad, in the European Parliament in Brussels as part of EXPO2017. He has learnt from personalities such as Greg Osby,Michał Kulenty and Zbigniew Namysłowski. He is an active musician and collaborated with musicians from around the world, including Thomas de Perquery and Nitin Sawhney. He is constantly looking for the most varied sounds. His style is deeply rooted in the European avant-garde genre. 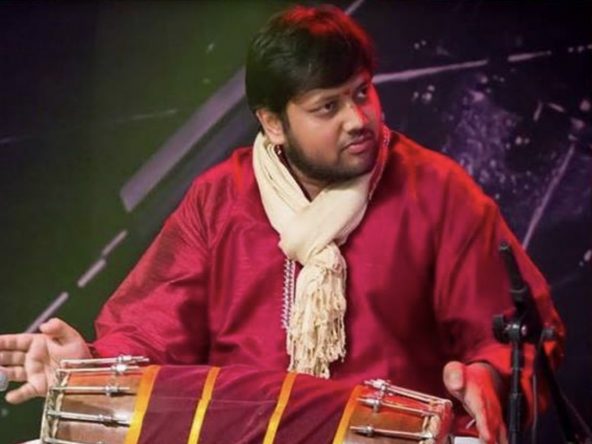 Anoor Vinod Shyam, was born into the family of musicians. He started learning Mridangam at the age of 10 under Vidwan Rudrapatnam Sathyakumar and presently learning under his father Vidwan GanakalaShree Anoor R Ananthakrishna Sharma, the well known multi-talented percussionist.

Being a percussion enthusiast, he also plays other percussion instruments like Pakhawaj,Khanjira,tabla,Dholak, dholki and konnakkol etc. He is an active member of  young vibrant percussion team Layalavanya and performs regularly with his Indian classical fusion band Nada Kalarava. Vinod has also performed at Qatar, Abu Dhabi, Singapore and the Frankfurt jazz festival – 2018. 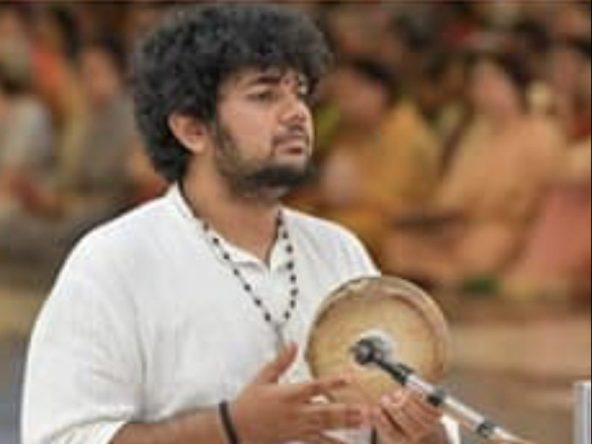 Hails from a family of Musicians. He is the fifth generation musician from his family. His Gurus include his Father Vid. Anoor Dattatreya Sharma, his Uncle – Vid. Anoor Ananthakrishna Sharma and his Cousin – Vinod Shyam Anoor.

Sunaad has been awarded the 1st place for Khanjira in the AIR National Level competition in 2012, the prestigious ITC Sangeetha Research Academy Award, the Kalavanta 2015 award, and the T A Harihara Sharma award from Krishna Gana Sabha, Chennai. Sunaad has performed with many eminent musicians in and around India and has toured with the Amithias project having played with the prestigious HR big band in Germany

Sunaad has also played other instruments like Chande, Sammela, Cajon and etc with ensembles like Layalahari, LayaLavanya, and Kalarava to name a few.