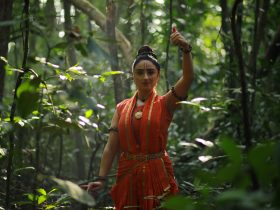 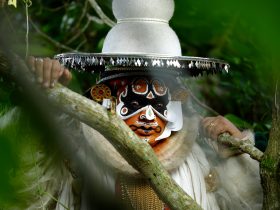 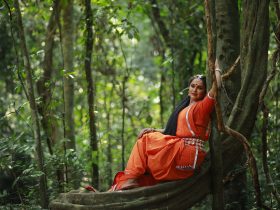 Rahasya is a collaboration of three classical dancers: Paris Laxmi in Bharatanatyam, Pallippuram Sunil in Kathakali and Abhayalakshmi in Odissi. Based on the Hindu epic of Ramayana, RAHASYA also refers to its three main characters: ‘RA’ for Rama, ‘HA’ for Hanuman and ‘SYA’ for Sita…

The Hindu epic of Ramayana has been retold by generations of artists, entertaining the audience with a multitude of characters. Revealing the depth of each character and understanding them beyond tales, RAHASYA is a project which emerged from over two years of research and several years of friendship. Our unique interpretation of Ramayana is inspired by the Folk stories traditionally passed down from ages through story telling. RAHASYA is an eclectic collaboration of established artists in the fields of Music, Dance and Drama, bringing out the best of their respective forms. Magnificent music with over 10 musicians, well researched script, Sanskrit poetry, theatrical voice artist, exquisite costumes and dancers of different styles are the highlights of this production.

Odissi from Odisha, kathakali from Kerala and Bharatnatyam from Tamil Nadu are three very different dance forms considering their format, music, technique and appearance, yet originating from the same source: the fifth Veda or Natya Shastra. Sanskrit was chosen for the lyrics as a common language between the three styles, while English for the narration was preferred for an international reach.

Coming together beyond style, region and form is an exceptional attempt of bringing cultural traditions together to create a unique and beautiful stage performance which will reach people from all walks of life, origins and backgrounds.

Music Director: Praveen D Rao is a musician, music director and lyricist based in Bangalore. He composes music for theatre, film, ballet, television, commercials, also performing and collaborating with artists extensively in India & abroad, and has been recognised with many awards in India. His outstanding knowledge in Carnatic, Hindustani, Folk Indian and foreign music, and his genius virtuosity has made him one of the most sought after music directors in India.

Narrator: Murali Gopy is an actor, screenwriter, singer, author, lyricist and journalist. His most acclaimed works on and off screen in the Malayalam Film Industry are considered path breakers in their respective genres. Murali Gopy is recognised as one of the most versatile artists of his generation, following the steps of his father Bharat Gopi in becoming one of India’s greatest artistic assets. We are proud to announce that Murali Gopy lent his exceptional voice to RAHASYA as the narrator of the story.

Sanskrit Lyricist: Arjun Bharadwaj is a Sanskrit poet and Carnatic flautist. He often collaborates with dancers and theatre groups to develop presentations based on classical themes. Currently Assistant Professor in Amrita Darshanam in Bangalore, he obtained his Master Degree in Sanskrit and MS Degree in Robotics. Arjun Bharadwaj has studied Indian Philosophy, Advaita Vedanta, Sanskrit literature, grammar & philosophy, and theory & practice of Natyashastra. He has published over 20 articles on arts, aesthetics and philosophy. 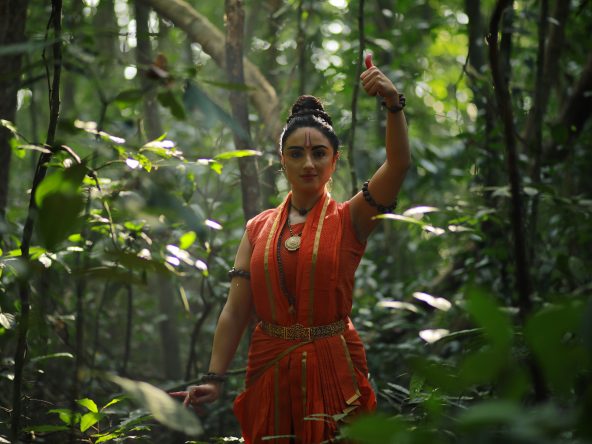 Paris Laxmi was born in Aix-en-Provence, France to a family of artists. She expressed her desire to dance at an early age and as her parents were in love with India and its Culture, she was merged into it from her birth and visited regularly India with her family since the age of 5. Laxmi started her training in Bharatanatyam at the of 9 with Armelle Choquard (disciple of Sri V.S. Muthuswami Pillai and Smt. Sucheta Chapekar) and later from Dominique Delorme (disciple of Sri V.S. Muthuswami Pillai and Dr. Padma Subrahmanyam); in India, under Smt. Sucheta Chapekar in Pune and at Dr. Padma Subrahmanyam’s Nrithyodaya School of Dance in Chennai. She also studied various European dance styles from the age of 5. Laxmi and her husband Sunil are teaching and directing their institution the Kalashakti School of Arts at Vaikom. Paris Laxmi is an active dancer who performs Bharatanatyam throughout India and abroad. She is also part of the Film Industry and has become a familiar face to the Malayalee audience. 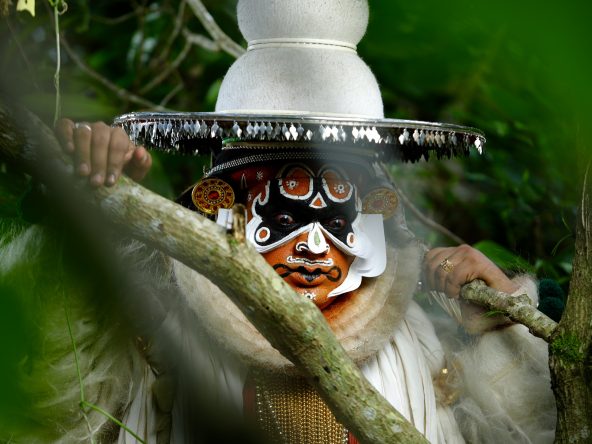 Pallippuram Sunil was born in Kerala in the village of Pallippuram, Alleppey. Fascinated by Kathakali since his childhood, Sunil started learning Kathakali from Kalabhavanam in Vaikom at the age of 14 from Kalamandalam Jayaprakash, Kalamandalam Prasanth, Kalamandalam Bhagyanath, Kalamandalam Sreekumar, Kalamandalam Haridas and RLV  Raghunath. He started performing in 1997, continued his studies at the RLV College Tripunithura and started teaching in 2004. After getting married to Paris Laxmi in 2012, the Kalashakthi School Of Arts and Kalashakti Mandapam was inaugurated by them in Vaikom. They also created a duet called ‘SANGAMAM’ in 2012 and in 2015 ‘Krishna Mayam’, a classical dance fusion of Kathakali and Bharatanatyam showcasing stories and manifestations of Lord Krishna with compositions from the Kathakali and Bharatanatyam repertoires. This duet has toured all over India, Gulf countries and Europe for various festivals. Pallippuram Sunil is actively performing in all major temple festivals in Kerala while teaching and collaborating with different artists 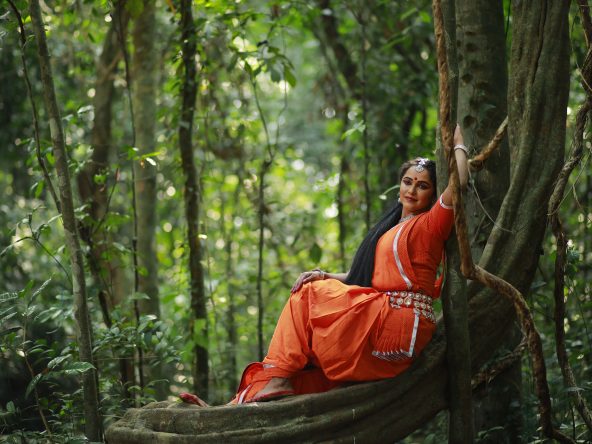 Abhayalakshmi is one of the leading young, passionate Odissi dancers of the country and a senior disciple of Guru Sharmila Mukerjee. She started training in Bharatanatyam from the age of 6 from Temple of Fine Arts, Coimbatore under the guidance of Guru Kamakshi Jayaram and Vimala Chandrashekar. She later moved to Bangalore after her engineering and started practicing Odissi at Sanjali Centre for Odissi Dance, directed by Guru Sharmila Mukherjee. Abhayalakshmi is an Odissi exponent empaneled under ICCR, SPICMACAY and a Doordarshan graded artist performing widely within the country and abroad. She has played lead roles in several productions and won the hearts of audience and critics alike. She has also worked with several leading exponents of the country and attended workshops of popular exponents like Sujatha Mohapatra, Ratikanth Mohapatra, Aruna Mohanty, Sharmila Biswas etc. Abhayalakshmi is now actively promoting Odissi through lecture demonstrations and workshops in several parts of Kerala.