Of Gods and Heroes 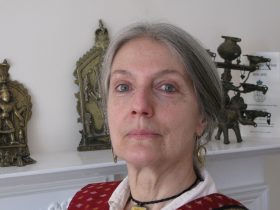 The temple hangings presented in this lecture are housed in the Victoria and Albert Museum, London. They were commissioned by Hindu temples and mathas, as well as by individuals for religious use. They were produced by the kalamkari process of hand-drawing, mordant-dyeing and painting, a complex technique that reached its highest expression in South India.

The majority of the nineteen pieces in the collection are from Coastal Andhra Pradesh or Tamil Nadu, with one exceptionally striking Ramayana hanging from Sri Lanka. Tamil and Telugu inscriptions help the viewer to decode the illustrated scenes. Apart from narratives drawn from the Epics and the Puranas, the artists also depicted remarkably accurate vistas of pilgrimage places such as Srirangam, Tirupparankunram and other famous holy sites.

All this material belongs to the 19th century, except for one remarkable 20th-century hanging from Srikalahasti which depicts the life of Christ in the style of a traditional Hindu kalamkari drawn by the master craftsman Jonnalagadda Gurappa Chetty, one of the most renowned exponents of the art of kalamkari. 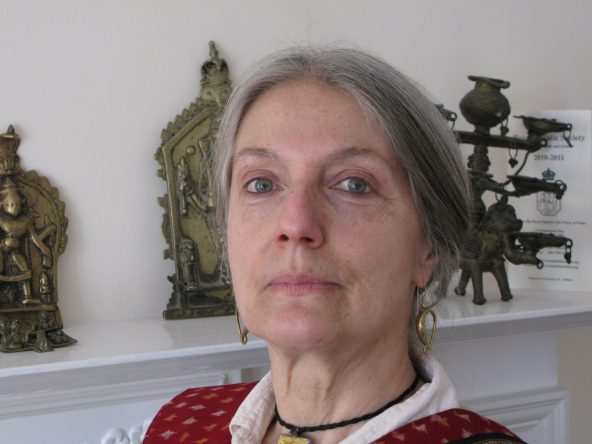 Professor Anna L Dallapiccola has a PhD in Indian Art History, a Habilitation (DLitt) from University of Heidelberg, Germany. Formerly Professor of Indian Art at the South Asia Institute of Heidelberg University from 1971 to 1995, she was appointed Honorary Professor at Edinburgh University in 1991, and has regularly lectured at the School of Oriental and African Studies, London. From 2000 to 2004, she was Visiting Professor at De Montfort University Leicester. She, along with George Michell and John Fritz, participated in the Vijayanagara Research Project from 1984 to 2001, writing mainly on sculpture and iconography.

Among her publications are South Indian Paintings: A Catalogue of the British Museum Collection (2010); Kalamkari Temple Hangings (2015), a catalogue of the painted temple cloths in the collection of the Victoria and Albert Museum; Reverse Glass Painting in India (2017); Thanjavur’s Gilded Gods, co-authored with Kuldip Singh and R G Singh (2018); and Lepakshi: Architecture, Sculpture, Painting, co-authored with Brigitte Khan Majlis, George Michell and John Fritz (2019).

At present, she works in India, with Anila Verghese on a research project concerning the art of the Vijayanagara successor states.