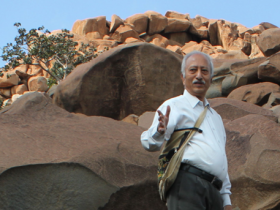 Sanganakallu Neolithic Site is the oldest known Neolithic site in India, discovered by William Fraser, a civil engineer of the mid-19th century who was based in Ballari. He found many Neolithic and Megalithic sites in and around the hills of Ballari and Sanganakallu. It was Robert Bruce Foote who gave definite archaeological status to both Kudatini and Sanganakallu sites. Five granite hills constitute the hill complex: Sannarachammagudda, Sadasivagudda,Choudammagudda, Suddalamattigudda and Hiregudda. They together form a horse-shoe shaped plateau that provided clear inter-site visibility to the hilltop occupants. This is perhaps the most extensive settlement, spread over an area of 1000 acres, with a two thousand years history, in southern India.

This site has been subjected to periodic investigations ever since it was first discovered in the later part of the 19th century. Recent multidisciplinary investigations, including modern methods of excavation and documentation, have helped us understand the origins and development of agricultural economies and ritual practices, from 2000-1000 BC, as well as trace the continuity from the Neolithic to the Iron Age.

The archaeobotanical evidence from Sannarachamma and Hiregudda Area A and D point towards a plant economy based on the cultivation of millets (Setaria verticillata, Brachiaria ramosa) and pulses (Macrotyloma uniflorum, Vigna radiata and Lablab pupureus). Ravi Korisettar will speak about this Millet revolution that occured 5000 years ago and also touch upon Foote’s legacy, which has been fortified by his work in Rayalaseema and the finds from Sanganakallu itself, now immortalised by a museum known as the Robert Bruce Foote Sanganakallu Archaeological Museum (RBFSAM) in Ballari. 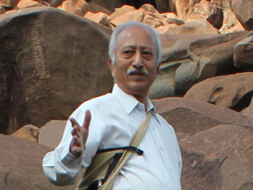 Ravi Korisettar is currently Adjunct Professor at national Institute of Advanced Studies, Bengaluru and also Hon. Director Robert Bruce Foote Sanganakallu Archaeological Museum, Ballari. Served in the Department of History and Archaeology, Karnatak University, Dharwad, from 1989-2013. His discovery of the Youngest Toba Tuff (YTT), volcanic ash of Sumatra origin, in peninsular river deposits was hailed as a ‘great discovery’ by the Indian press and its significance in dating the Middle and Upper Palaeolithic has brought the Indian subcontinent at the forefront of debate on expansion of modern humans out of Africa. He is considered an expert on the ongoing out of Africa debate.

He discovered a large number of prehistoric painted rock shelters in the Kurnool District of Andhra Pradesh and these have led to a series of investigations on identifying suitable dating methods for rock art and understanding the non-material culture of the authors of these paintings. He is co-editor of Quaternary Environments and Geoarchaeology of India (Geological Society of India,1995), The Rise of Early Human Behaviour in Global Context (Routledge,1998), Indian Archaeology in Retrospect (ICHR and Manohar [4 volumes], 2001/2), and a special issue of Quaternary International (Vol. 258, 2011) and editor of Beyond Stone and More Stones (Vol. 1: 2017 and Vol. 2: 2018) and the third volume is in press. His collaborative publications have been well cited and his H-index is on the increase.