Chitta: An Exploration of Consciousness 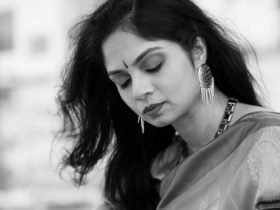 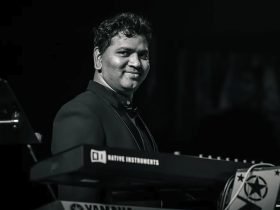 We are what we believe. Our consciousness dictates our response to the world and beyond. How do we navigate the clutter of the world inside and outside our minds? Where do we seek guidance in dealing with the age old struggles between materialism and spiritualism, lines between ego and self-respect, ideas of the self and the supreme?

The music and poetry of our great poets and philosophers provide answers and guidance. From Thyagaraja’s juxtaposition of the joys of “nidhi” (wealth) vs “sannidhi” (proximity to the divine), or Purandara Dasa’s dilemmas of giving up ego (“naanu nannadu emba narakadolage biddu” – I am in a hell of me and myself) while maintaining self-respect (“abhimaanavanu toredu naa parara beduvuda” – I have to grovel before others, giving up my self respect) – these ideas have traversed historical time periods and geographical contexts to resonate as strongly today as beacons of guiding light, as they did centuries ago. After all, however much humanity evolves, we are still human!

This performance is structured as an intimate conversation between the artiste and the audience, with songs and stories interspersed seamlessly. The repertoire includes both Carnatic and Hindustani compositions from Thyagaraja, Mira, Purandara Dasa, Pt. CR Vyas, Subramania Bharati, Annamacharya and others. Featuring a multiplicity of languages (Sanskrit, Hindi, Kannada, Tamil and Telugu), the concert also celebrates the plurality of expression in our country.

Manasi explores the timeless questions of materialism versus spiritualism, the self and the supreme, and the interconnectedness of the universe, through an intimate concert and conversation featuring songs and poetry in various Indian languages. She is joined by her collaborator, music composer and pianist Shadrach Solomon. 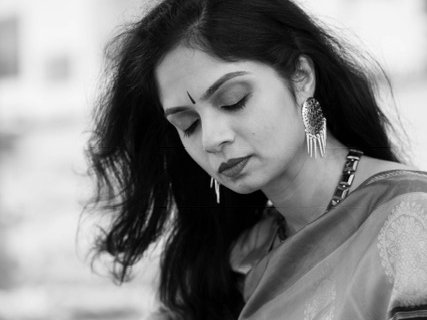 Manasi Prasad is a combination of an accomplished singer, eloquent orator and arts manager. She is one of the best known faces among the new generation of Carnatic musicians and is the Museum Director of the Indian Music Experience, India’s first interactive music museum.

As a performing artist for over 25 years now, Manasi has travelled extensively in her career, across India and the world. Manasi has performed at leading sabhas such as the Madras Music Academy December season, Shanmukhananda Fine Arts Mumbai, Bangalore Gayana Samaja, Swathi Sangeethotsavam in Thiruvanathapuram, SICA in Hyderabad, the Cleveland Thyagaraja Festival etc. She is an empanelled artist of the ICCR (Indian Council for Cultural Relations), and has also performed concerts across six continents in countries such as South America, Africa and Australia, besides the US, Europe and Middle East.

Numerous awards have come her way, including the prestigious Bismillah Khan Yuva Puraskar from Government of India’s Sangeet Natak Akademi, Ananya Yuva Puraskar from Ananya Bengaluru, ‘Yuva Kalaakar Puraskar’ (Young Artist Award) from Sri Shanmukhananda Fine Arts, Mumbai and the Rotary- Brigade Young Achievers award. She has performed on the television and radio numerous times. She has won arts scholarships from both the Karnataka and Central Governments. She is a TED Fellow and a Senior Fellow of the Melton Foundation. In recognition of her achievements, Manasi was recognized as one of the 30 “Indians of Tomorrow” in the annual issue of India Today.

Manasi has sung in over 10 music albums, many of which she has composed music for. Manasi has gained popularity as an innovative artiste, who never shies away from trying something new. She is adept at rendering Raagam Taanam Pallavi, especially the Avadhana Pallavi, which requires unique multi-tasking abilities. She has rendered Jugal Bandhis with many Hindustani artistes. She used her dual abilities of singing and dancing to much acclaim, when she presented Giridhara Mira, a solo music-dance feature. She has also attempted to add a new dimension to classical music through her production- Olave Jeevana Saakshaatkara (Love is Life’s Fulfilment) – which explores the different facets of love. She has conceptualized and presented Gana Yatra, featuring spiritual music forms from across India, with a 15- member ensemble. She also presents contemporary classical concerts combining music and poetry in a seamless blend.

Manasi Prasad is truly a multifaceted artiste. She is an Engineering graduate and also completed her MBA at the Indian Institute of Management Bangalore, where she won the prestigious Aditya Birla Scholarship. She is a trained Bharatanatyam dancer . Her other activities include hosting live and TV shows, composing and singing music for dance productions, as well as writing and speaking extensively on various subjects. She delivers talks, workshops and lecture demonstrations to corporate and student audiences that connect the arts to other facets of society and make the classical arts relevant to contemporary times. 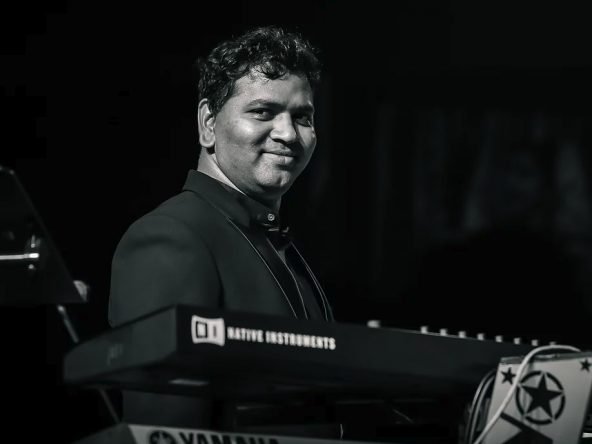 Born into a family with Music in their DNA, Shadrach Solomon’s love for music came naturally to him.  His formal training in Western Classical Piano at a tender age of 6 years from his father, Mr.Christopher Shyam Prasad was a good beginning that continued, with the able guidance of Sister John of Good Shepherd’s Convent, who was also known for teaching music to the Royal Family of Wodeyars, then later took advanced piano lessons from Ravi Kashyap. Solomon’s profession as a musician began when he was 15 years.

Now, with 30 years of wide experience and exposure in the Music Industry, the ever smiling, calm, clever and soft spoken Shadrach Solomon has plenty to offer from his kitty than one can imagine, as in, he can, dextrously play almost all genres at ease, programme and arrange music in his unique approach, compose and perform his craft remarkably, that make him the most sought after Musician and an extraordinary Music Director.

Shadrach Solomon, popularly known as Solomon in the Music fraternity teamed up with many Music Bands as a Pianist, including the well known ‘Antaraagni’ (now called ‘The Raghu Dixit Project’), Layatharanga, Pratidhwani and Vikshepa, till he decided to form his own band ‘Raaga Garage’ along with the International Fame, Ms.Jyotsna Srikanth and Robert Atchison. Since 2006, Solomon has been performing Carnatic classical music, biennially with the renowned violinist, Dr Jyotsna Srikanth in UK.