A film by Sean McAllister 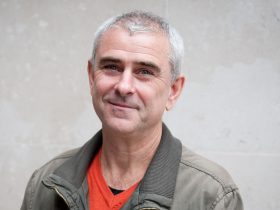 The director Sean McAllister will be in conversation with Sunanda Bhat on Saturday, 1st August 2020 at 7:00pm IST. Register to join the conversation here.

Comrades and lovers Amer and Raghda met in a Syrian prison cell 15 years ago. He first saw her bloodied face after a beating when she was placed in a neighboring cell. Over months they communicated through a tiny hole they’d secretly made in the wall. They fell in love and when released got married and started a family together. When McAllister first meets their family in 2009, Raghda is back in prison leaving Amer to look after their 4 boys alone; but as the ‘Arab Spring’ sweeps the region, the family’s fate shifts irrevocably. Filmed over 5 years, the film charts their incredible odyssey to political freedom. For Raghda and Amer, it is a journey of hope, dreams and despair: for the revolution, their homeland and each other.

“Filmed over a period of five years, this intimate and insightful documentary perfectly balances the personal and the political, telling its tale of national and international upheavals through their impact on individuals at the cutting edge of change. This is a profoundly moving account of two love stories: that between the film’s central couple, Amer and Raghda, who are torn apart by imprisonment and exile; the other being their love for Syria, which casts a long shadow over their lives, their marriage and their children.” – © Mark Kermode, The Guardian

Sean McAllister is an award-winning documentary filmmaker celebrated as one of the UK’s most exciting talents. From his early films Working for the Enemy (1997) and Minders (1998), both nominated for a Royal Television Society Awards, to his more recent successes, Sundance Jury Prize-winning Liberace of Baghdad (2004), Japan: A Story of Love and Hate (2008), and A Syrian Love Story (2015), Sean’s work continues to inspire, surprise and fascinate audiences. His films portray, with characteristic intimacy and frankness, people from different parts of the world who are struggling to survive but are survivors, caught up in political and personal conflict, trying to make sense of the world we live in. A Syrian Love Story (2015) was nominated for numerous awards including a BAFTA (Best Debut), a BIFA (Best Documentary), and for Documentary Of The year by the Critics Circle.