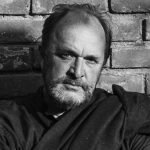 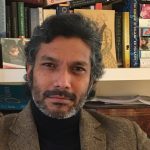 In this podcast William Dalrymple and Moin Mir discuss The East India Company through their books The Anarchy and Surat: Fall of a Port. Rise of a Prince.

William Dalrymple’s The Anarchy has been called ‘his most ambitious and riveting book to date’. It tells the story of the East India Company as it transitioned from being a ‘conventional international trading corporation dealing in silks and spices’ to ‘an aggressive colonial power in the guise of a multinational business’, ‘unfolding a timely cautionary tale of the first global corporate power’.

The East India Company first entered India via Surat when its ships docked on the shores of this seaside city in the early 17th century. An example of the way the Company functioned in its ruthless greed for power and wealth is the annexation of the port of Surat and the violation of the Treaty it signed with the Nawab of Surat. The palaces, lands, jewellery and all that was part of the private estates of the Nawab were usurped leaving the infant granddaughters of the last Nawab on the brink of destitution. Moin Mir is a descendant of the last Nawab of Surat and next in line to succeed his father as Darbar of Kamadhiya, an erstwhile principality in Gujarat. In his book, Surat: Fall of a Port. Rise of a Prince, he tells the story of the legal battle that the father of the two young princesses fought, a tale of fortitude and romance, to defeat the Company and gain restitution.

This episode is an edited version of a live conversation on BIC Streams done in collaboration with the International Music & Arts Society.