59. Making of Cultures in Early India (with Romila Thapar)

Impact of migrations till the 14th century 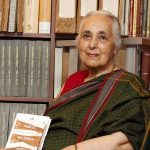 In this talk as part of ‘The Satish Chandra Memorial Lecture’, Romila Thapar discusses two categories of migrants, the pastoralists and the traders up to about the fourteenth century. A fundamental difference between the two categories is that pastoral migrants tend to come to a new area, set up scattered settlements and tend to not return to their homelands. Traders tend to do the reverse since they stay in the cities where they have their trading partners. Even when they settle in the host societies there is a minimum connection between their homeland and where they have settled.

The interface between the host society and the migrant settlement frequently results in elements of new cultures. These can be changed versions of a language, new social customs and new deities or forms of worship. This podcast is an extract of the longer BIC Streams event held earlier in the week.

In between, from 1972 to 1980 he was first Vice Chairman and then the Chairman of the University Grants Commission.

Prof. Chandra was Secretary and later President of the Indian History Congress. He also served on the council of the United Nations University, Tokyo between 1980 and 1986. He was an associated director of research at the Maison des Sciences de l’Homme as well as an executive board member at the International Congress of Historical Sciences, both in Paris. In 1988, he was asked by Union Public Service Commission to head a committee to review the system of appointments to the higher civil services.

Prof. Chandra wrote or edited about 21 books over the years : notably, his 1948 PhD thesis Parties & Politics at the Mughal Court (first published in 1959) was at some time recommended reading for aspirants to the Union Public Service exams, while his History of Medieval India (2007, Orient Blackswan) is still widely used as a textbook in schools & colleges across India.

Son of Sir Sita Ram, India’s first High Commissioner to Pakistan (1947-48), Prof. Chandra has along with some other JNU historians been said to have been a ‘left leaning historian’ who espoused the Marxist approach to history, and one whose early experiences helped bridge the intellectual gap in interpreting medieval Indian history and modern times.