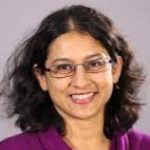 Centring the narrative around a lively, erudite and thoroughly enjoyable history of one family from Malwa in Central India which held substantial land and various administrative offices in the Mughal empire and negotiated over several generations with three regimes – the Mughals, the Marathas and the British, Dr Chatterjee assembles a living, breathing world through her book, Negotiating Mughal Law: A Family of Landlords across Three Indian Empires. It is a classic history from below, populated with real people and colourful individuals in both spectacular and everyday situations which tells a riveting story even as it opens up many important questions for scholars and students of Mughal history and historical scholarship more broadly.

In this episode of BIC Talks Dr. Prachi Deshpande talks to Dr. Nandini Chatterjee about the story of how she reconstructed a coherent archive to tell a micro-history of one family over such a long period of time and about it being a thought provoking meditation on the very nature of the historical archive.