105. Talking US Politics (with Edward Luce)

A commentary on our times 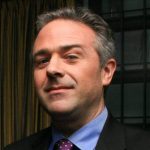 Edward Luce, one of the highly regarded commentators on US politics, talks about the dynamics of US politics, and the impact of the newly elected US government on the world, especially on India.

This episode was originally streamed live on March 12th, 2021 as the annual Girish Karnad Memorial / Kamaladevi Chhatopadhyay Lecture. One of the leading and most prestigious events on the calendar, the New India Foundation Annual Lecture has facilitated debate on important social issues, with talks featuring renowned scholars and thinkers.

Edward Luce is the US national editor and columnist at the Financial Times. Before that he was the FT’s Washington Bureau chief. Other roles have included South Asia bureau chief, Capital Markets editor, and Philippines Correspondent. He is the author of three highly acclaimed books, The Retreat of Western Liberalism (2017), Time to Start Thinking: America in the Age of Descent (2012), and In Spite of the Gods: The Strange Rise of Modern India (2007).He appears regularly on CNN, NPR, MSNBC’s Morning Joe, and the BBC.