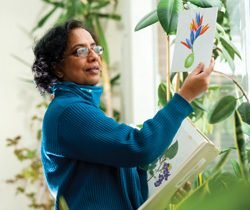 This talk addresses the gaps in the history of science in India by focusing on the life and scientific contribution of EK Janaki Ammal, eminent cytologist and botanist through her letters. It also attempts to trace the obstacles faced by a woman who wanted to make a mark in a traditionally male dominated field.

Janaki Ammal’s career started as a botanist and cytologist when she worked with C.D. Darlington at the John Innes Horticultural Institute in London from 1940-45. It was here that she studied the origin and evolution of cultivated plants resulting in the Chromosome Atlas of Cultivated Plants which she co-authored with C.D. Darlington and which became an important source for cytological work on the economic plants of the world.

On her return to India in 1948 she became a leading scientist of the nation who wanted to create a national system of generic science. She was able to do this as the first director of the Central Botanical Laboratory of the Government of India at Lucknow. She received several accolades becoming Fellow of the Linnean society of London, the Royal Geographical Society, the Asiatic Society of Bengal, the Royal Asiatic Society, London and the Indian Academy of Sciences.

Part of PHYTOPIA, in collaboration with Science Gallery Bengaluru 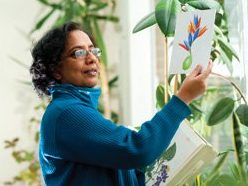 Vinita Damodaran is a historian of modern India, interested in sustainable development dialogues in the global South. Her work ranges from the social and political history of Bihar to the environmental history of South Asia, including using historical records to understand climate change in the Indian Ocean World. Her publications include; Broken Promises, Indian Nationalism and the Congress Party in Bihar (1992), Nature and the Orient, Essays on the Environmental History of South and South-East Asia(1998),Post Colonial India, History Politics and Culture (2000), British empire and the natural world: environmental encounters in South Asia, (2010), East India Company and the Natural world (2014). She is also the author of several articles in established journals. She is particularly interested in questions of environmental change, identity and resistance in Eastern India. An experienced researcher and teacher she has an M.Phil from JNU and a PhD from Cambridge. Currently, she is the director of the Centre for World Environmental History at Sussex.